Part 1 of 3 Special Feature: Getting to Know Ebony G. Patterson

Who is Ebony G. Patterson? 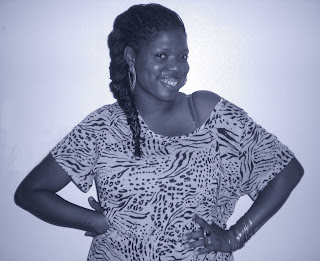 She is a Jamaican born contemporary fine artist, who currently works in Lexington Kentucky as an Assistant Painting Professor at the University of Kentucky. When Patterson, affectionately called “Bonnie” or “Bonny”, is not working in Kentucky, she is at her home in Kingston delving in her Jamaican culture.
Constantly seeking new ways to improve her craft, the internationally acclaimed artist challenges her thoughts and eventually the ideas of others with her portrayal of Jamaican dancehall; that of its fashion, dance, and its cultural impact on the Jamaican sub-groups directly affiliate to the genre of music.

Brief History:
Patterson graduated from Edna Manley College of the Visual and Performing Arts with an Honours Diploma in Painting, after which she attended Sam Fox College of Design & Visual Arts at Washington University in St. Louis, receiving her Masters of Fine Arts in Printmaking and Drawing.  Her most recent project was in Port of Spain Trinidad during her two week artists-in-residency which ended on Wednessday July 27, 2011. Her work in progress which was both and installation and performance, was sponsored by Alice Yard as a part of their new segment called ACT 5 in commemoration of their five years of being recognized as a creative space.  Patterson is the first Caribbean artist invited to partake in this creative engagement.
Patterson’s exhibition titled “9 of 219” included nine ornately designed coffins representing the nine lives lost to crime in the area during her short stay.  It opened on Monday July 25 and took the form of a funeral procession, which the public was invited to partake in, and ended as an installation where the coffins were symbolically laid in a space designated by Alice Yard.
Patterson’s self-titled “bling funeral,” is partly inspired by the flamboyance of Jamaican dancehall culture. She holds a strong spiritual connection to the thought provoking presentation, seeing her country as having a direct resemblance to Trinidad with its troubled crime rate. The ideas can also be attributed to the sometimes colourful approach that some of our Jamaican dancehall artist tend to bury their dead.
Having been exposed to Patterson's more lighthearted side, I decided to get more personal with the artist and asked her to share five things about herself that the general public would not know.

FIVE THINGS YOU PROBABLY DON’T KNOW ABOUT EBONY PATTERSON
1.       She took Ballet lessons for about eight years of her childhood

2.   One summer of high school she worked for a short period of time in the kitchen of Mother’s located in Half Way Tree. She lasted for about a week.
3.      She did her first drawing at three and it was a cockroach
4.      She can hold a note or two. Actually, when she sings she sounds like a cross between a Billie Holiday and a Jill Scott, i.e., old school sultry.

5.      She's a shoe-aholic. Name the coolest funky kicks and foot wear and Patterson probably owns a pair.
Couldn't find the drawing with the cockroach, but here's a Valentine's Day card Patterson made for her mom around the same age. 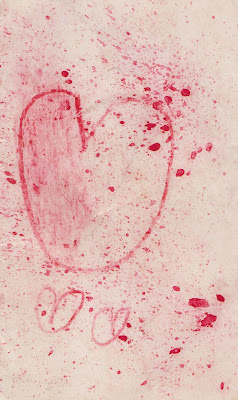 Below is a painting she did at eight years old: 'Untitled' 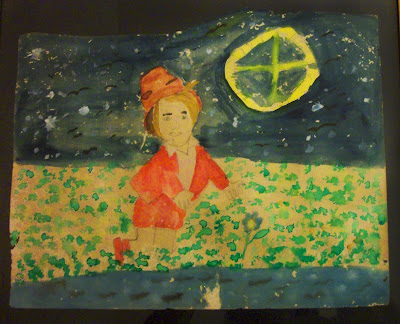 What do you think? Think she had the knack for being an artist??

I hope you enjoyed Part 1 of 2 of my exclusive feature on Ebony G. Patterson. Visit me next week Monday (August 8) after I, you, and we celebrate Jamaica's Independence for Part 2 to learn more about the artist. I will also be sharing more of her locally and internationally recognized, "more adult", peices.

Posted by Chevonese Fender at 3:08 PM