From Gangstas to Disciplez...Ebony G. Patterson Takes A Creative Approach to Dancehall

“Bleaching...no longer takes on the whole notion of colour inferiority…now it’s a statement of masculinity.”

For someone who has exhibited in more than forty group exhibitions, a growing number of solo shows, and has been feature in countless publications, one would think that contemporary visual artist Ebony G. Patterson has been on this earth for at least fifty years.  But nah, she’s only thirty.

It’s no accident she’s an artist today. Before graduating from The Queens School, Jamaica, she cautiously reflected on her life and what she wanted to pursue. As a child Patterson was constantly surrounded by creative people. Her mother’s first assignment for the then three year old was to draw a roach, of all things.  Her job was so, astonishingly, well done that the precious work of art was readily displayed among her mother's co-workers.

Patterson’s father had other intentions for the toddler, balancing his daughter’s drawing of roaches with birds  by teaching her how to sketch the chirping creatures. She mastered that easily, and while she commandeered the art of drawing she found time with her god-sister and musical neighbours to sing in their back yard.

With that kind of exposure it seemed only logical that she studied at the tertiary level at Edna Manley College of the Visual and Performing Arts (EMCVPA), where she majored in Painting.

“My parents were both stunned when I said I wanted to be an artist and a part time singer.  Go figure,” Patterson  reflected.

Perhaps her parents suffered from a bout of creative remorse. But Patterson continued on a sure path, continuing her studies At Sam Fox College, which led to a secure post as Assistant Professor in Painting at the University of Kentucky. 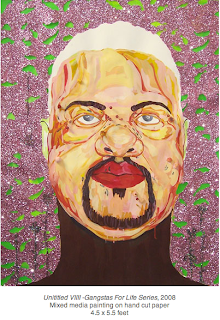 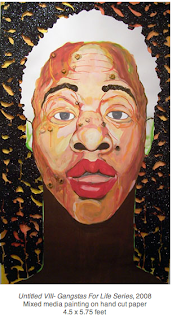 The contemporary artist has always been fascinated with Dancehall and its impact on Jamaica's working class. While dancehall culture tends to portray this form of aggression, Patterson undermines that notion in her collage of images—Gangstas for Life, which is an exploration of “the grotesque as the sought after beauty.”


In other words: bleaching, the noticeable cross gender appearances in fashion, where saggy pants make way for a tighter fit; earth tone and more sombre colours becoming bright reds, oranges, greens or any bold representation of the lively transformation of dancehall and its cultural impact.


In her recent TEDx Irie presentation held in Kingston in early April of this year, Patterson shone some light on one of her most recent exhibitions, Gangstas, Disciplez + Doiley Boyz.

“Bleaching, it seems, no longer takes on the whole notion of colour inferiority…now it’s a statement of masculinity,” she explained.

Exhibit A: Patterson's impression of gangstas, their styles, and their bleaching
I suppose if you consider the recent buzz surrounding Dancehall artiste Vybz Kartel and his proud proclamation of de-colouring his skin tone, one sees her point.  Kartel makes it clear that he is not uncomfortable with his race and instead glamorizes bleaching as a way of making him more attractive and desirable to the opposite sex.

Currently, Patterson is expanding her line of work, staying true to the dancehall stereotypes and prototypes. Her work in progress under The Fambily Series called The Brella Crew, is an impression taken in part from Kartel’s infamous personification of Michael Jackson having to walk under an umbrella when in day light to protect his skin from the sun. This work in progress will highlight in more detail how dancehall has not only shaped the individual, but the family unit.


With the help of Photographer, Marvin Bartley, her two assistants, and models with impressive 'gangsta' impersonations, Patterson was able to pull off her latest project on the Brella Crew. Now she's even adding more intrigue by adding her interpretation, in pure Ebony form, of young gangsta disciplez, i.e., young children and teenagers.

See behind the scenes of the Brella Crew shoot here:


Take a closer look at some of Ebony's works over the years:

Join me a week from today, Monday, August 15 for a continuation of Ebony's feature: Part III titled "In conversation with Ebony G. Patterson"

Posted by Chevonese Fender at 4:48 PM