The World’s Fastest Man has a new franchise.  Have you heard of it?

In collaboration with Kingston Live Entertainment Ltd, Usain Bolt has a new dining and sports lounge located in Marketplace, Kingston, called Tracks and Records.  I suppose the title is most fitting for the sporting magnifico who has expressed some interest in music and entertainment. 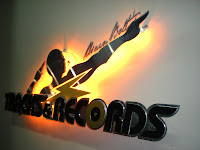 I, and a couple of friends, visited the new franchise early last month and were amazed to learn that the spot had been open since two months prior! That night wasn’t necessarily one of Kingston’s most sociable nights, seeing that it was a Wednesday, but for some reason the place was packed.  My friends and I were in the slightly crowded lobby for a good seven minutes before we were acknowledged by the hostess.
In the mean time, I quietly admired the bright green walls overlade with small and large vinyl records and the flashy miniature race timer with Bolt’s proudly proclaimed world record times. I zoned out from the décor and into my friends’ conversation with the hostess and my senses were heightened by the final words that actually expelled from the chica’s mouth.

You see, for the entire time of the conversation while my friends queried the availability of a table for three, the “lovely” hostess was busy punching whatever it was on her screen at the reception desk.  So there was barely any eye contact, as she advised us to either sit by the bar, wait for a table, and she raised her head this time and pointedly added, “...or you can leave.”

You know, if this were a movie, this would be the point where the record is scratched, suddenly pausing the music while a few mouths drop open in stupor. Of course, quite taken by the last barefaced statement, we looked amongst ourselves, internally agreeing to leave seeing that we’ve been getting the bad vibe since we actually set foot through the doors. Anyone who doesn’t want our money isn’t worth spending with...right? Nevertheless, we were hungry and curious and truly wanted to check the spot out. So we overlooked the crude statement and were escorted to the extended version of the bar.

In minutes we were addressed by a server, who handed us our menus; and there laid another problem. The menus, which took the shape and look of large vinyl records, are so big that we fought for space at the counter top to flip through the pages. To be frank, one menu could have served for all three of us.
While we waited, we keenly dissected the buzzing scene.  Dissected, because I was accompanied by two fine artists and it was natural for them to go in depth with the execution of the décor.  As I gathered the interpretations of my gracious friends, I gathered my own.
From the buoyancy of the colours to the intermeshing of wood, metal, marble, zinc, soft to hard furnishings, forward technology and old fashion fixtures, there appears to be an intentional fusion of Jamaica’s rural and urban vibe, with an edgy European influence. I’m still undecided on whether the execution works, but undoubtedly it is novel and does scream for your attention.
The Décor
At first the décor appears confusing with this almost uncomplimentary blend of polished and rough impressions.  Smooth marble counters at the bar are surrounded by zinc walls. Modish green-cushioned booths are countered by small board-game table tops fashioned with sleek chairs, similar to those by the bar.  By the aisle of these tables are your every day Jamaican wooden light posts with an unexpected combination of flat screen TVs and board advertisements fastened to them.  With flat screen panels just about everywhere, including the bathrooms, a grandiose projector screen—generally carrying sports programmes—top things off.  Additionally there are four booths that have a touch screen table for ordering your food and apparently you can change the stations of the flat panel TVs that hang by those walls. The bathroom has a fresh ambience and where there is a flat screen TV, there is also a trough, supported by cinder blocks for washing your hands.
This theme resonates through the rest of the building, except for the mezzanine, also labelled the Digicel Sky Box, which mostly carries more refined furnishings. So now that I’m over the design and get the drift, it’s time to focus on the food.
The refinement of the building had our pockets on edge, so we were quite nervous about what to order. Thankfully the prices are listed in the menus to avoid the surprise bill, outside of taxes and gratuity. After much contemplation, my friends settled for the Pan Chicken and ‘Flitters’—Yes, I said flitters, not fritters—and I, the Jerk Chicken Quesadilla and a bowl of fries.
We were finally seated by one of the board-game tables when our food arrived and were duly surprised at the copious pan chicken dish, along with the flitters, which were flavoursome and essentially filling. While I wasn’t impressed with the fries, I couldn’t get enough of the quesadilla slices.  The night was finished off with a confection of chocolate decadence. 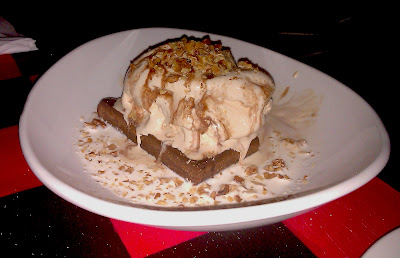 I’m particularly fund of this treat. Unlike other places with similar desserts, the brownie isn’t, at all, too sweet. My only complaint is the nuts that adorned the cream. Not really a fan of dried macadamia nuts.
So, with the cheeky hostess in the back of our minds, we enjoyed our evening so much that a few weeks later we returned. This time we were greeted by another, much friendlier, hostess and were taken to our booth on the mezzanine.
Here’s an important note: If you intend on getting your stomach’s worth at an affordable price, you best head there before the kitchen closes at ten. After that they only serve entrées or appetizers; and though they are delectable, they aren’t as filling and you might find yourself spending more than you should had you ordered a full meal. And another thing—for those of you who happen not to walk with Jamaican dollars, don’t you worry your pretty little calculators about conversions, because your bill will take care of that for you; but only in UK, US and Canadian dollars.
Overall, Tracks and Records is a hit and a wise investment. The food is moderately affordable, the ambience is fascinating and cosy and outside of a few blunders, the service is fairly commendable. So if you haven’t yet graced the restaurant with your stomachs and pockets, I encourage you to do so.
More on décor

If you've already visited Tracks and Records, what’s your take on the decor and food?  How was your overall experience?  Would you recommend this venue to a friend?
Posted by Chevonese Fender at 5:51 PM