"Sometimes when I write songs, I treat my father like ... he's still with me." 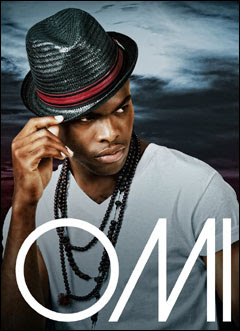 Who is OMI and why this sudden buzz about him? Well if you haven’t yet been introduced to this young Jamaican singer here is your chance.


At the time when I conducted this interview, it so happened to be OMI's first. I was kindly reminded my his manager that I was given a great privilege, albeit, I had to wait until his label started promotions before I could actually post anything. Now that his sound has been hitting the airwaves, this feature is long over due...

OMI, née Omar Samuel Pasley, is from a modest lifestyle in Clarendon and is no stranger to the creative arts.  He graduated from Garvey Maceo High and later secured a position as a Graphic Artist at the Super Plus Supermarket in May Pen. Garvey Maceo seems to be the new breeding ground for young talent ranging from fine art to music.  Know I-Octane? Well he hails from the same school.  So, is Garvey Maceo the place to go for scouting new talent?  Well that’s too soon to say, but by the looks of Omar ‘OMI’ Pasley, the idea doesn’t seem so farfetched.

Outside of his voice and song writing, Pasley prides in being a painter, honing is ability to do portraits.  But that’s not why he intrigues me, what I find fascinating is his sound.  Think of Tarrus Riley or a John Legend and you have an idea. But in all honesty, OMI brings to the table a sound that no other artist has to date.  That’s exactly why Jamaican music/business mogul and producer SP wasted no time in scooping him up.

SP, known for catapulting Shabba Ranks’ career, discovered Pasley almost on a whim.  He had been in discussions with Sydney Bartley, Director of Culture of the Jamaican Ministry of Education, Youth and Culture of Jamaica, also a Clarendon native where the minister encouraged him to source talent from the parish to assists its young aspirants. SP retold his experience that day he visited the Garvey Maceo High School. He was introduced to seven talents and being somewhat of a knit picky man he was hardly wooed. Naturally he left disappointed, but later received a sound bite with one of Pasley’s tracks and from the first note, SP saw a reason to invest.

Now SP and OMI are working on securing the twenty-four year old’s image and his market. OMI believes that crossing paths with SP was fate, claiming that the producer holds uncanny similarities to his father, who passed away at forty-two.

“The way how SP handles things, his seriousness and quick thinking, is like my father. And sometimes I’m just amazed,” reflected Pasley.

Pursuing music is not just a fancy for the young artiste.  He grew up with a father who also painted and who was a singer and song writer and it seemed more than fitting that he wears the same hat today.  For Pasley his career is a dream lived through his father’s spirit.

“Sometimes when I write songs, I treat my father like he’s SP and I almost ask him aloud if he likes the sound or if the words are good,” the deeply contemplative Pasley said.  “It’s like he’s still with me.”

By OMI’s image and, most importantly, his sound, the young singer is bound to have future records deals and longevity in the business, especially with a level-headed manager like SP. Currently two albums are in the works and according to the singer his topics cover a wide range of issues from sex, love, and modern day controversy. His current singles “Cheerleader” and “Standing on All Threes” clearly shows his diversity and differentiates him from the rest of the pack.  So, don’t take him lightly.

Just as Pasley is passionate about his craft, so is he about his spiritually. When asked the million dollar question, what is the one thing he cannot leave the house without, he boldly replied, “Prayer.”


Five Things You Should Know about OMI
Check out his tracks here:
"Standing on All Threes"