How Cheap and Clean do you get??

Young Jamaican fine artist, Ebony G. Patterson, seems to be the one most sought after by galleries these days.  After winning the Rex Nettleford Fellowship for Cultural Studies awarded by the Rhodes Trust last year, Patterson promised something grand and worthwhile.  It was no surprise that she continued with her exploration of gender, masculinity in particular, and fashion in Dancehall culture. Her new venture is titled, Cheap and Clean: Interrogating Masculinities Project.


The project includes fourteen young men from the inner city, made possible with the assistance of the Multi-Care Foundation of Jamaica, a non-profit organization working with youth from the inner-city in the Arts and Sports. Over the past few weeks Patterson has been working closely with all fourteen boys, learning first hand, from their perspective, how they identify the cultural roles of men in Jamaican society and themselves as males from the inner-city.


Each child is asked by the artist to design outfits befitting their unique tastes, which they will embellish and later wear for the live projection and documentation of the actual Cheap and Clean project schedule to take place on Saturday, March 10 in Downtown Kingston, Jamaica. The project can be viewed via the web on Facebook through participating pages—Patterson’s artist fan page (Ebony G. Patterson), Alice Yard in Trinidad, Fresh Milk in Barbados, Bermuda National Gallery in Bermuda, the Kentucky Museum of Art and Craft in the USA, and Pop Studios in Bahamas.


On March 10 viewers will watch, in real time, a live performance with the fourteen participants.  They will be placed in a constructed photo studio designed to reflect a Georgian dollhouse. The young men in their uniquely enhanced outfits will pose for their photographs, which will be taken by noted Jamaican fine art and fashion photographer Marvin Bartley.

So what is this 'Cheap and Clean' concept? Well, I could easily say that it's a cultural habit fostered by Jamaicans, usually from the lower economic strata, who pride themselves in donning the sharpest and most expensive looking attires, without the lofty price tag. In other words: wearing “knock-off brands” that look the part, adding to the bling and flashy lifestyle. But let’s not judge too quickly, especially for those of us who love shopping in places like China town for our glossy looking “no-name” bags, paying a little extra to get high-end designer labels like Gucci, Prada, or Valentino on them.  So instead of forking out $1000 USD or more, you pay $30 to $40 bucks. Pretty much the same thing, right? That’s keeping it cheap and clean, or rather inexpensive but still feeling and looking like a million dollars.  However, Patterson sums it nicely by calling it “being trendy on a budget.”

Out of curiosity I badgered the busy artists with a few important questions to further explain her experience with planning the project.

What will you find yourself doing up until the launch of the project?
Well, up until March 10 I will be meeting with the 14 young men involved in the project, embellishing a massive dollhouse, discussing designs with the tailor, Chris Pablo, and telling everyone to friend the Facebook page to see the project. Also, I’ll be talking to (the web savvy) Ryan Lincoln about the technical stuff with the project and waiting on the edge of my seat hoping it all falls into place.

How has the experience been so far,  working with the boys and the young men?
I work with young people all the time and have always loved it; plus I already have a relationship with the Multi Care Foundation, a not-for-profit organization that sets up Art and Sports programmes in the inner city communities and schools. I’m extremely grateful for them allowing fourteen of their young men to participate in my project. This is the first time I’m working with only boys and young men, though, and it has proven to be quite revealing. I’ve learned that some of them have had to grow up pretty fast because of their community upbringing.

What do you hope people will take away from your Cheap and Clean project?
I hope the project will call people to question the performative nature of gender. We are all playing roles—masculine and feminine—and in the context of the Jamaican culture these roles are played amid major contradictions. I’m hoping that by using young men and boys it will indicate a particular place and stage where we begin to formulate these roles, and question how this affects our larger understanding of gender dynamics. Hopefully, people will question, again, whether or not these so-called roles even matter today.

After this outlandish and impressive project, what on earth will you do to top this?
Oh dear! I’m excited by this project, but it does not end on March 10th. The core happens then, but there is a street video series that goes in conjunction with it. I had a young man, Dushaine Loraine, conduct a series of interviews with men in his community about their ideas on masculinity. These videos are quite raw and revealing! These clips will be compiled in a web archive with the documentation from the rest of the project, including essays from O'Neil Lawrence, Curator for the National Gallery of Jamaica, and Nicholas Laughlin, a writer from Trinidad.  After all of that, I’ve been invited to do a solo project, which will be in Martinique in May this year. I’ll be building 73 coffins in response to the Tivoli incursion that occurred in Jamaica in 2010.

See below, related images from Patterson's on-going Out and Bad exhibition which opened in January this year in the Bermuda National Gallery an runs until May 2012. 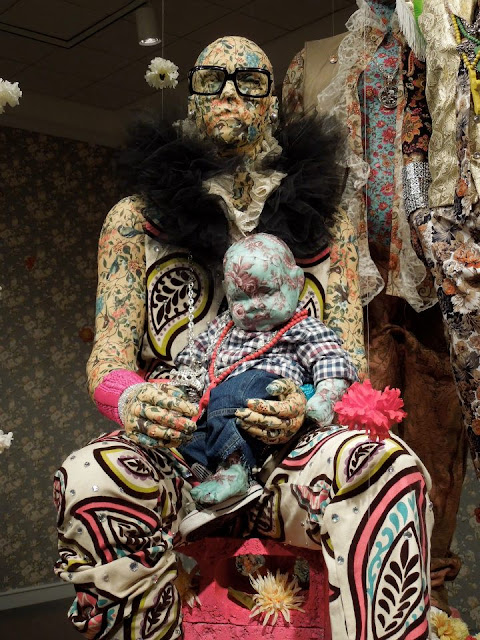 And to think that, at the end of her final response, Patterson has the nerve to modestly say, “that's all” to the various projects she has planned. This forward-thinker clearly does not understand the meaning of “too much,” as she continues to turn heads and wow the art community and those surrounding it with her prolific ideas and execution.

Be sure to meet the artist herself, tonight at 8pm Jamaican (eastern) time, where she will be delving into her ‘Cheap and Clean’ project. To gain access, simply like her fan page—Ebony G. Patterson, then click on the U-Stream link located on the left bottom of the menu. Oh, and please support Ebony and spread the word.

Also, don’t forget to tune back in on the artist's page on Saturday, March 10 for the highly anticipated live viewing of Cheap and Clean, also through U-Stream at 3PM Jamaican/Eastern time!

Almost eleven years ago stood two colossal glass coated structures. Now, in its place are two deep cavities in the form of a water fountain or pool.

I came across the 9/11 Memorial site by accident, on my way to Washington Street to research a location for one of my novels. When I realized my proximity to the location I decided that it wouldn't hurt to check it out. Apparently a pass is needed to enter the site, which you acquire from their website. However, in the wake of Presidents Day, the passes were readily available on spot.

Strangely, I learnt about the twin towers the day they were destroyed. It was merely two months into my first year at Albion College in Michigan, when a girl from our dorm burst into my room, exclaiming, "Oh my God, they just hit the towers!"  My roommate, who has lived in America for quite some time, responded with knowing shock, while I, on the other hand, was just bewildered.

This wasn’t the welcome to America I anticipated. What I saw on the news channel felt like a movie.  In fact I was convinced that it was, until the channel changed and I saw the same thing. And the same thing again and again, which was a lofty pointed glass building with one of its sides burning—soot, rubble, and unidentified objects falling from it in the process. It appeared the other—its twin, still untouched, watched helplessly as the mirror image of itself burnt and slowly crumbled. For weeks a heavy and foreboding sadness mixed with anger and confusion settle over the college. 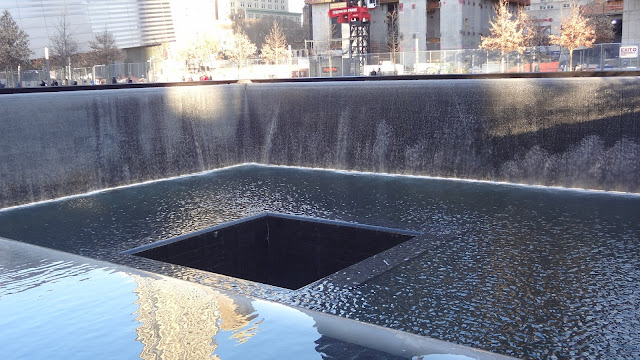 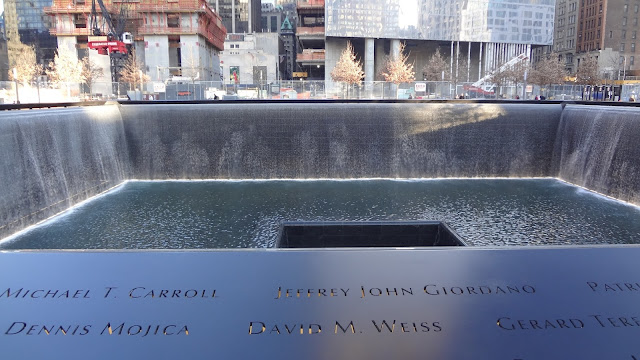 Now, I have finally acquainted myself with what has become a part of America's scar. It was extremely cold that day, but I curiously joined the long line of visitors and accepted my pass from the officers donned in their 9/11 Memorial jackets. After the line sluggishly progressed, my pass was scanned. I went through the security check point, had the pass marked with a red permanent marker then followed the queue into what resembled a park. The winter season made it appear starkly destitute, with no semblance of lushness or green trees. The main attraction, though, were the fountains that indicated where the towers once stood. The names of the lives lost from the September 2011 attack and the Pentagon bombing were engraved all around it, and I along with everyone else just took it in, feeling something, yet, at times, feeling nothing but the biting cold.  The sound of drills, cranes and the like humming heavily in the background, as construction won’t be completed until 2014.

The museum was closed that day, so there was only so much exploring I could do. One thing is certain, the two dents in America’s history have managed not be an eye sore, but more a tourist attraction.

Have you visited the 9/11 Memorial site yourself?  Feel free to share your thoughts and experience.

See more images  within and around the memorial site: 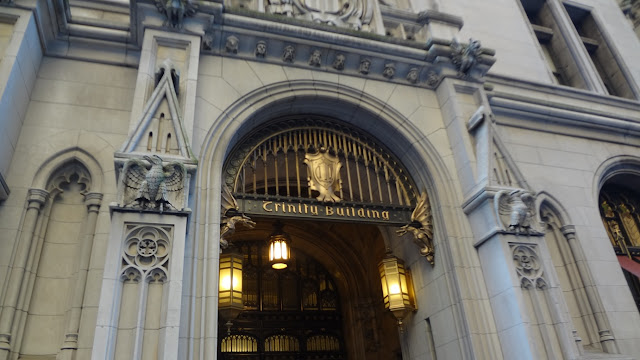 Posted by Chevonese Fender at 3:18 PM No comments: