Step 1 and most important rule:  Keep it hush hush
Step 2: Gather your team and secure location
Step 3: Call friends and family about the time and location and be sure to remind them that it’s a surprise
Step 4: Be casual and normal. Don’t start acting strange.  A sudden change of temperament may cause the person, you are throwing the surprise for, to become suspicious.  It doesn't hurt not to mention that the birthday is coming up either.  In some cases, they completely forget!  As it was in Marvin Bartley's case. 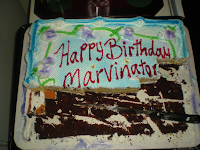 Step 5: Ensure cake, treats (nuts; chips; salsa dips, which can be home-made; wine; etc.) for patrons who will need to eat and be entertained, are secured.
*Note to Patrons: Bringing a bottle of wine or a few treats to add to the party doesn't hurt either. Thank you!
Step 6: On the appointed day remember the first part of Rule 4—BE CASUAL!  ACT NORMAL!  But most importantly put your plan of diversion in place.  In our case, Dexter Pottinger and I live in the same complex, so there was no way to carry the items (cake etc.) to the venue without Marvin noticing.  Which leads me to…
Step 7: Get package out the house!  Dexter gladly took Marvin on a local Kingston tour, with the promise that he would take him to Port Royal for fish later that evening.  Of course it was around 8pm by then and naturally Marvin was slightly suspicious…of something.  I mean, who goes to Port Royal after 8pm…right?  Meanwhile, I was at the venue ensuring that everyone had arrived.
Step 8: If necessary, feel free to do a rehearsal. In the case of our friend Duane Thomas, who cunningly avoided having his picture taken and who gladly extended his home to us, pretended to be Marvin, while we yelled "surprise."  Was kinda exhausting after two runs. 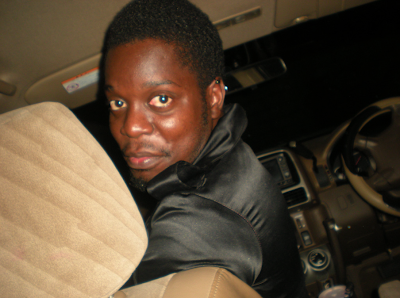 Marvin Bartley smiles at the end of a good night
So everyone was at the venue.  Where was the package??  Well it so happened that it arrived minutes later. The package a.k.a Marvin Bartley was under the impression that he was coming to Duane’s for a meeting, after which he would go to Port Royal for fish.  Umm… it’s about 8:30ish at night by then.
Step 9: Another scheme was needed.  Package was too polite and would not open door ahead of Dexter.  So Dexter pretended to tie his already tied shoelace, so that package/Marvin could open the door instead.  It worked!
When Marvin opened the door, we all yelled “SURPRISE!” and watched the many facial expressions unfold.  Apart from jumping back in fear that he was being attacked by…something, the look on his face was priceless!  We watched in amusement as Marvin recounted all the occurrences leading up to the party that he now admitted were indeed odd.  He showed gratitude for being duped.  After all, it was his first birthday party.
Step 10: Enjoy the success!  Ensure that everyone at least has a drink in hand and is having a good time.
So there you have it.  Ten important steps to planning the perfect surprise birthday party!

Have a similar story to share?  Feel free to tell how you planned your surprise party and add any steps that you think are important to note. Remember to keep it PG 13.

Posted by Chevonese Fender at 3:05 PM